HomeGADGETSSamsung Galaxy A32 5G And Realme 8 Pro In The Test Showdown...
GADGETS 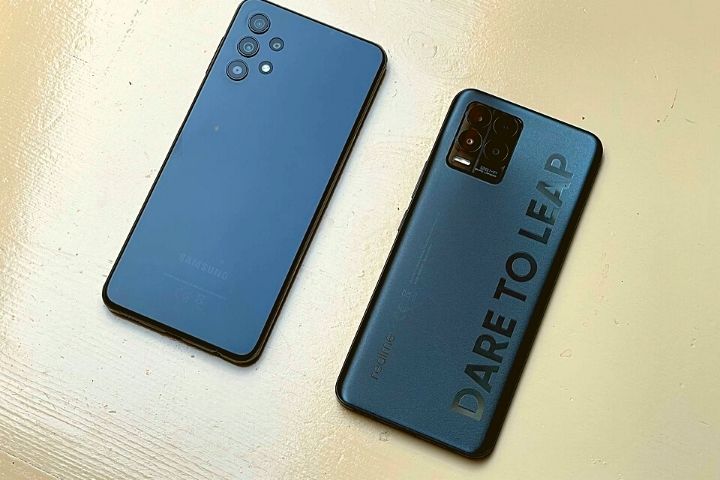 How many smartphones do you get for around 250 euros? We tested two models that, apart from price, have little in common.

With prices around and over 1000 euros, top smartphones such as Apple’s iPhones and Samsung’s Galaxy S series are too expensive for many consumers. They are more likely to look for devices that cost between 200 and 300 euros. But what do you get for the price of a quarter iPhone? To find out, I tested two models from this price range, Samsung’s Galaxy A32 5G and the brand new Realme 8 Pro.

With the A32 5G, Samsung wants to bring a bit of the glamor of its top models into the smartphone mid-range. At least in terms of size, it works too; with 6.5 inches, the screen is precisely between the Galaxy S21 and the Galaxy S21 +. Another important selling point for the group is its 5G capability, reflected in the name. To use 5G with the Galaxy A32 5G, of course, you need a mobile phone contract that supports it and a 5G network where you are. Unfortunately, neither is a matter of course in Germany for a long time.

There are four cameras in the back and one on display for photos and videos. As a drive, Samsung has opted for a processor from MediaTek; the in-house Exynos chips, just like those from Qualcomm, are only used in more expensive models. The memory is not particularly well equipped with 64 or 128 gigabytes (GB), but it can be expanded. The main memory of 4 GB can be described as sparingly prepared for an Android mobile phone. Android 11 is installed as the operating system.

Realme is one of the newcomers trying to fight for their place on the world market and in Germany. The company describes itself as the “fastest-growing smartphone brand.” However, according to Counterpoint, it is still far behind the market leaders, with a global market share of four percent. It has so far been particularly successful in India.

At 6.4 inches, its screen is insignificantly smaller than that of the A32, but a chip from Qualcomm’s mid-range powers it. You have to do without 5G with this model. But you always get it with 128 GB of storage space, which can be expanded using a memory card. The standard model has 6 GB of working memory; 8 GB can be obtained for an additional charge of 20 euros. Here, too, there are four cameras in the back and a fifth on the screen.

Many Samsung smartphones are characterized by their high-quality AMOLED displays, not the Galaxy A32 5G. The fact that the resolution of 1600 by 720 pixels is not exceptionally high for a screen of this size can still be tolerated, but the LC display used here is so dependent on the viewing angle. From a viewing angle of around 45 degrees, you can barely see anything, and the screen doesn’t look brilliant either.

In comparison, one is all the more pleased about the Amoled display of the Realme cell phone. Not only because its resolution of 2400 by 1080 pixels fits a screen of this size much better, but above all, because it is significantly brighter and provides much stronger contrasts. For example, it is easier to read in full sun than the A32 5G. Only the frame rate, which is limited to 60 frames per second, could be criticized here. Some other cell phones offer a more pleasant image reproduction with 90 or even 120 frames per second, such as scrolling. But then they are also substantially more expensive. The screen is excellent for this price range.

Read Also : “Where Is?” For Third-Party Providers: In The Future, iPhone Will Find Bicycles, Headphones, And Backpacks

The Galaxy A32 5G is equipped with four cameras, one of which is only used for depth measurement, which is needed, for example, to soften the background of portrait photos. In addition to the primary camera with 48 megapixels, an ultra-wide-angle camera with eight megapixels and a macro lens with five megapixels are also practical. Especially with the primary camera, attractive and color-coordinated pictures can be taken in good light. If it gets darker, the picture quality leaves a lot to be desired. Videos are recorded at up to 30 frames per second in Full HD and 4K, but you should avoid fast pans as such recordings can easily streak.

Fun fact: The primary camera of the Realme 8 Pro contains a photosensor from Samsung – with a whopping 108 megapixels. However, to take advantage of this, you have to select a particular mode, which is only worthwhile with perfect lighting and excellent details in the subject. Otherwise, the standard photo modes are entirely sufficient, in which the nine sensor pixels are combined into one image pixel to achieve better results, especially in low light.

The quality of the recordings made with this quartet is pleasingly good, although the colors are sometimes a tad too strong. In return, the 8 Pro has some amusing, helpful photo and video modes. Such as a tilt-shift function for pictures and videos, which in the test only worked for portrait shots.

To cut a long story short: Neither the Galaxy A32 5G nor the Realme 8 Pro can keep up with current top smartphones such as the iPhone 12, the Galaxy S21, or the OnePlus 9 Pro. In performance measurement programs, you get values ​​that are around a third of the performance of an iPhone 12, with the Realme proving to be a bit more robust.

However, both are fast enough for all everyday tasks in practice, and Android never feels slow on them. Most of the games are still there, mainly if you use Samsung’s Game Launcher or Realme’s Gamespace, which help with small measures to provide the games with as much performance as possible.

The battery life is okay with both devices; both switched off after twelve hours of video playback with the highest screen brightness and an empty battery. The Samsung comes with a quick charging power supply with 15 watts of power; in the box of the Realme, there is a significantly larger charging plug with 65 watts of power, which can fully charge the battery in good three-quarters of an hour.

No question about it, in direct comparison, there is a clear winner: the Realme 8 Pro. The newcomer delivers better photos, has a significantly better display, more memory, and a faster power supply. Samsung’s mid-range range falls considerably due to its poor screen.