The Crazy Gadgets From The High-Tech Show 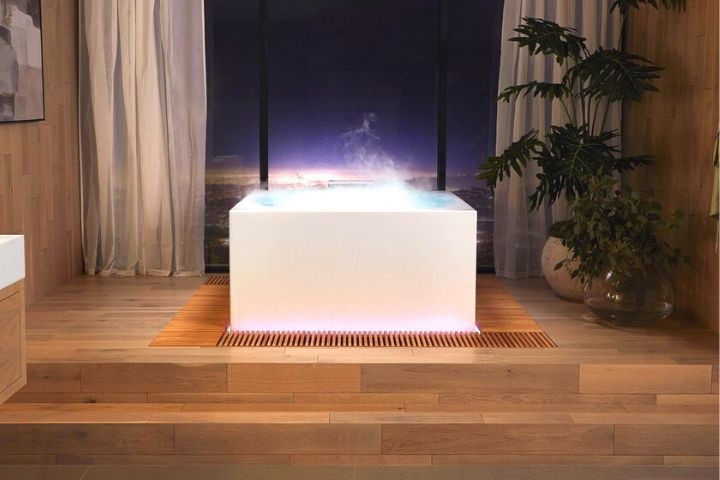 There is no shortage of crazy and exciting innovations. We show the most interesting things.

1. The US manufacturer Kohler advertises the “Stillness” bathroom with the slogan: “Let yourself be carried away into a world of decadent serenity,” and that is no understatement. After all, anyone can build bathtubs. But this one is supposed to emulate the Japanese shinrin-yoku, forest bathing. For this, the tub is not filled profanely through a tap but from below through a water inlet. Also, fragrant steam wafts over the surface; excess water runs down the outside, light-emitting diodes illuminate the whole thing. The result should be deep relaxation – unless you pay attention to the price, which should be between 6200 and 16,000 dollars depending on the equipment.

2. The big topic in 2021 is germs. Or rather, how to get rid of them, destroy them, kill them. Accessory manufacturer Targus has several ideas for this. One of them is the UV-C Disinfection Light, which is supposed to kill pathogens with the help of UV-C light. As soon as its motion sensor detects no movement in the area, it activates its UV-C LEDs for five minutes and then goes back to sleep. We couldn’t try it out, but somehow the construction could get in the way of a clear view of the monitor.

3. The 2Office Antimicrobial Backpack hits the same notch as the UV-C light. A water-repellent coating is usually advertised. It says here that an antimicrobial coating should prevent the growth of microorganisms at the most critical contact points. Hopefully, this works better than the often permeable protective layers against rain.

4. After wearables have counted steps, measured pulse, and weight, and then analyzed sleep in recent years, the AirPop mask is now intended to give its wearer a deeper understanding of their breathing. Fits in well with the time. Sensors should measure the wearer’s breathing cycles and provide information about how many pollutants the mask has filtered out of the air for him. An app makes all of this nicely graphically visible—the price for this: $ 150. The filters, which have to be changed regularly, cost extra.

5. It was just a matter of time. The British mobile communications manufacturer Binatone is showing MaskFone, the first wireless headset with a breathing mask – or vice versa at the virtual CES. A built-in microphone should ensure good intelligibility during phone calls, which often falls by the wayside with other shows. The integrated headphones can be used for making phone calls and listening to music, and the battery life is specified as twelve hours. At 50 dollars, the MaskFone is far cheaper than the AirPop mask, but it also needs new filters regularly.

6. Incipio brings iPhone cases to market under the name Organicore, which are supposed to protect the cell phone and the environment. They are made from plant-based raw materials that are entirely compostable when the next iPhone is under the Christmas tree at some point. Despite the ecological focus, the Bio-Cases should be able to buffer falls from up to 4.24 meters. At 40 dollars are no more expensive than other mobile phone cases from this manufacturer.

7. It’s always a good idea to be thinner with notebooks, and the new ThinkPad X1 Titanium Yoga is only eleven millimeters thick. Nevertheless, it should deliver Dolby Atmos sound and, according to Lenovo, has a particularly economical 13.5-inch screen with Dolby Vision and HDR. Optionally, it should also be possible to order it with a 5G cellular module. After purchasing the device, the wallet is as thin as the device because prices start at 2149 euros.

8. HP promotes the new Envy 14 notebook as a mobile workstation for creative people who need a fast processor and graphics card but who are far away from power outlets for a long time. The device should last up to 16.5 hours on battery. However, the outstanding feature is a tiny app that makes it possible to use the screen as a selfie lamp so that you look better during video conferences.

9. “Calling Elvis,” that’s what colleagues might think when they see which microphone you are using to talk to them in the video conference, provided you are using the Shure MV5C. The manufacturer recreated its legendary Unidyne vocal microphone, which was used not only by Elvis Presley but also by Frank Sinatra and numerous news anchors in the 1950s. Whether this version sounds as good as the original remains to be seen, but since you can plug it into Macs and Windows PCs via USB, it should at least be straightforward to use. At 109 euros, however, it is not exactly cheap for a PC microphone.

10. You can use an iPhone combined with AirPods as a hearing aid via the “Live monitoring” function. The start-up Noopl takes this idea one step further. The small box attached to the cell phone contains three microphones, which are supposed to ensure that background noise can be filtered out. In combination with the Noopl app, the voice of the person you turn to is always highlighted. A price for these potentially valuable accessories has not yet been determined.

11. In addition to televisions and game consoles, Sony is now also building drones. The aircraft called AirPeak is far from what hobby drones can do. Instead of a built-in camera, it takes a reflex camera from Sony’s Alpha series onboard instead of holiday films intended for professional users. The price, for which the manufacturer has not yet provided any information, is likely to be correspondingly high. “A few thousand euros” should be a rough and accurate guess.