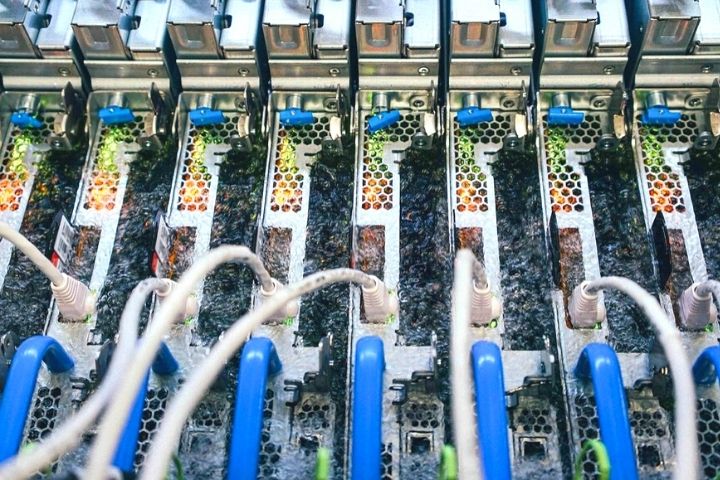 Because computer chips require more and more energy and thus produce more and more waste heat, the US company wants to cool computer systems in liquid – but not in water.

Microsoft’s engineers have a thing for liquids. In 2015, for example, they sank a small data center in the Atlantic off the Scottish Orkney Islands. And not because they wanted to get rid of it, but because they hoped to use the cold seawater to cool the computers. Five years later, they lifted the computer container, which was now densely populated by mussels, back to the surface and described the experiment known as Project Natick as a success.

But while the cooling in this project was still done by nitrogen gas, which gave off the heat from the microprocessors to the sea via heat exchangers, entire server racks are immersed in a cooling liquid in a new Microsoft project.

In pictures published by the company , this looks confusing at first glance: the liquid that flows around the circuit boards appears to be boiling. And actually, it does, but not at 100 degrees Celsius because it’s not water that the engineers immerse the computers in. That would also be counterproductive since moisture is known to conduct electricity and instantly lead to short circuits.

Therefore, the choice fell on a liquid not specified by Microsoft, but non-conductive, according to “The Verge,” based on fluorocarbons, which have a much lower boiling point than water, namely 50 degrees Celsius. To take advantage of their properties, the servers are sunk in hermetically sealed tanks. The boiling coolant can evaporate and condense on condenser plates embedded in the lid and then rain back into the tank in the form of drops.

The unusual cooling method is necessary because computer chips require more and more electrical energy and thus produce more waste heat, explains Microsoft manager John Roach. Because the chips contain ever more and ever-smaller assemblies, the power consumption of computer processors has risen from around 150 watts to more than 300 watts. Graphics processors, often used in data centers, would even convert more than 700 watts per chip.

The previously standard air cooling would no longer be sufficient, said Christian Belady, vice president of Microsoft’s development group for data centers in Redmond. “That’s what drives us to immersion cooling, in which we can boil the heat directly from the surface of the chip.” Because liquids dissipate heat better than air, this system could put the computers closer together, meaning more computing power per square meter focus.

Microsoft primarily uses the mini-data center built for the test in the tank to buffer short-term peak loads, for example, when many employees dial into team conferences at 1 and 2 p.m. at the same time. Ultimately, the technology should help save energy to operate data centers more cheaply. It is also hoped to reduce the failure rates and the servers’ maintenance effort through liquid cooling.

As a possible application for the new technology, the group names data centers, which, like oil tanks, could be buried under 5G radio masts in the middle of city centers. However, it will be some time before that happens. For the next few months, the engineers have initially decided to do a series of tests to see whether their idea is suitable for series production.

Also Read: Samsung Galaxy A32 5G And Realme 8 Pro In The Test Showdown In The 250 Euro Class

Share
Facebook
Twitter
Pinterest
WhatsApp
Previous articleSamsung Galaxy A32 5G And Realme 8 Pro In The Test Showdown In The 250 Euro Class
Next article“Ready For” Technology Being Tested -Motorola Wants To Turn The Cell Phone Into A Home Office.