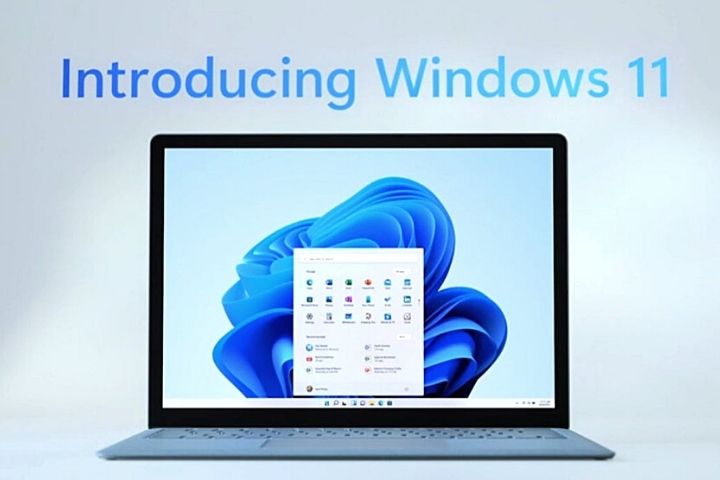 The new software should be innovative and familiar at the same time. In doing so, the group throws well-known things overboard and even accommodates Android in its system.

“This is the first version of a new era of windows,” said Microsoft CEO Satya Nadella when he finished the presentation of Microsoft’s new Windows 11 operating system after a 45-minute online show. Nadella’s words were preceded by a presentation that gave the impression that the company had finally arrived in the age of online events. Professionally produced video clips alternated with similar presentations. The pace was fast, as was the information density.

At least if you could see the show, because no sooner had the event started than many viewers on Twitter complained that the stream was jerky or not running at all. Microsoft’s pragmatic answer: check out the creek that’s on Twitter.

What was then seen was a cleverly calculated marketing show at its best. Microsoft manager Panos Panay made it clear again and again that Windows 11 is a personal concern to him and that the new software is about creating something new and is familiar at the same time.

And that’s exactly what Windows 11 is noticeable. The first thing that catches the eye is the visual innovations:

In the future, the corners of windows will be gently rounded.

Semi-transparent windows and lighting effects give the operating system a reduced, elegant look. This also applies to the new start menu, which is a departure from the decades-old mantra that the start menu must be located at the bottom left and instead sits in the middle above the taskbar. This looks more modern and could be helpful on computers with touch displays and tablets. At least for right-handers who don’t have to stretch their arm far to get there. And if you can’t get used to it at all, you can move the menu back to its old location, at the bottom left of the screen.

However, not only the position but also the layout of the start menu has been changed. Microsoft has finally thrown the old live tiles that Windows 10 inherited from Windows 8 overboard. Instead, you can put icons of the apps there that you use regularly. Below that, the system lists the programs and documents that you last used.

Many users bought an additional monitor with the home office boom or took it with them from the office. Because as good as it is to work on a notebook when you are out and about, a large monitor can make work a lot easier if you work with several programs simultaneously. And Outlook and Teams alone need quite a bit of space.

If you now connect a second or even two screens to the notebook, you can instruct Windows 11 to remember the position of the windows when you remove the monitor or put the notebook to sleep. They appear in the same place on the screen when you wake up the notebook or connect it to the monitor again. This is complemented by the option to minimize windows from a monitor that has been removed automatically. So the screen is not cluttered when you switch from the desk to the sofa.

Microsoft wants to simplify the handling of several programs simultaneously with a function that makes it easier to place several windows next to each other on the screen without them overlapping.

To do this, click on the “Zoom out” symbol in the top right of a window, to the left of the “Close” cross. A menu then pops up in which you can call up different variants of windows lying next to and on top of each other. Which window layouts can be selected there is determined according to the aspect ratio and the monitor’s resolution.

An Update For Updates

An important point in developing the new Windows seems to be to seal PCs against known security gaps through regular updates. Windows updates should not only be significantly smaller in the future. The talk was 40 per cent smaller file sizes and processed in the background without user intervention.

The chat software Teams are integrated directly into Windows 11, so conversations can be started from the taskbar. This applies equally to text chats, video chats and voice calls and can be used for professional and private chats. Clearly: Microsoft wants to make Teams the standard chat app, especially since the software is also available for other operating systems.

The End Of Tablet Mode

Windows 10’s tablet model no longer exists in Windows 11. Instead, the system only changes a few details that make it easier to control the system with your fingers; for example, if you remove the keyboard on a 2-in-1 PC: the icons in the taskbar move a little further apart, controls become a little larger so that you can move windows quickly with your finger and change their size. In addition, Windows 11 on tablets uses almost the entire screen as a touchpad, on which the usual touchpad gestures work.

Windows 11 borrows the Auto-HDR function from the new Xbox Series X and S consoles, which automatically converts the graphics of many games to a more extensive dynamic range, HDR, provided you have an HDR-capable monitor. Another technology that has been adapted from Microsoft’s consoles is DirectStorage, a technology that enables games to load content directly into the computer’s graphics card, thereby reducing loading times. A prerequisite for this, however, is an optimized PC with an SSD of the latest generation.

With the Xbox Game Pass, Microsoft is also bringing its subscription offer for games to Windows 11, making many games available to customers for a monthly fee. This also includes the cloud gaming service xCloud, making it possible to stream games in high quality if the computer’s hardware is too weak. A prerequisite for this, however, is a good internet connection.

In the new Microsoft Store, Microsoft lets developers off the leash. Panay promised that if you bring your billing system with you, you don’t have to pay any fees to Microsoft. This announcement is likely to make waves in the current discussion about app stores and the related costs to their operators.

Perhaps the biggest surprise, however, was the announcement that you can use Android apps under Windows 11. Applications such as Instagram and TikTok can be downloaded from Amazon’s App Store via the Microsoft Store, said Panos Panay. On the PC, they would then be made to work by technology from Intel.

There Is Something Missing

However, Microsoft left out a not entirely unimportant detail in its presentation on Thursday evening: the release date. One can see that the company plans to publish it in the fall. Late September or early October would be suitable dates for which appropriate new hardware from companies such as Dell, HP and Acer could come onto the market in addition to the software.

Nevertheless, Windows 11 will be able to be tried out beforehand. The first public beta will be out very soon. Those who are curious should be cautious about it. On the one hand, because such pre-release versions always contain errors that can lead to crashes and data loss, on the other hand, according to information from Microsoft managers, they will not yet have all the functions shown on Thursday. These should only be added gradually until the system is complete in a few months.