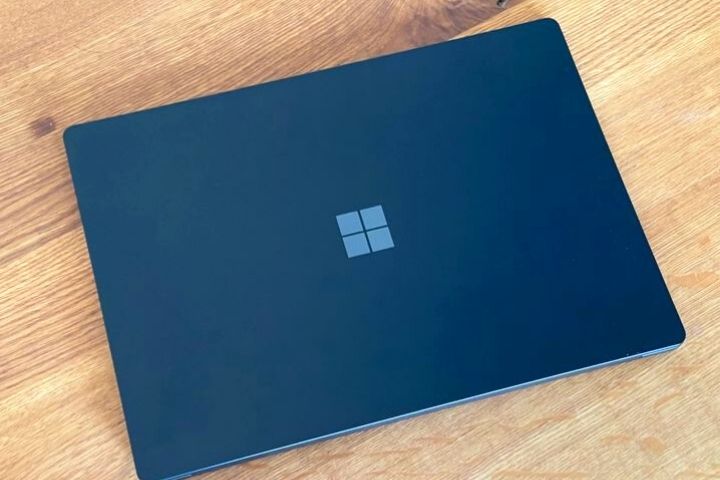 AMD instead of Intel inside, a large touchscreen and an excellent keyboard are the ingredients for Microsoft’s new notebook. We have tested whether this is a recipe for success.

In keeping with the home office life, Microsoft emphasizes that the Surface Laptop 4 is “optimized for digital meetings”.

When I wanted to take part in a team video conference for the first time, I was sceptical about whether this claim was justified because the camera’s preview image showed me strongly overemphasized colours and badly blurred facial features. A couple of selfies taken with Microsoft’s camera app confirmed my impression: The pictures looked washed out, my facial skin was much smoother than it is. The camera only has a 720p resolution. In the case of televisions, that was a long time ago.

In the first video conference, the surprise itself: without knowing anything about my test device, colleagues asked whether I had a new camera. The picture is much sharper and brighter than usual. Because that puzzled me, I made a few more test video calls. The result was always the same: The unanimous opinion was that the picture was much more precise than usual. A colleague compared the effect with the magic wand, with which you can automatically improve photos in Apple’s Photos app.

So yes, the new Surface Laptop is ideally suited for video conferencing. The microphones – Microsoft calls them “studio microphones” – work pretty well, too, and the hidden speakers are always suitable for video conferencing. A little listening to music at medium volume and watching movies works well with it, and the speakers can also be very loud but then lose a lot of depth.

With 2496 x 1664 pixels, the screen has a resolution that is well suited to the 15-inch format, which not only allows fine details to be seen in photos but also sharpens text. Combined with the intense colour rendering, it is also suitable for a movie evening without a television. Various testers with special devices measured values ​​between 350 and 400 nits for the maximum brightness, which corresponds to Apple’s MacBook Air level.

The display is bright enough, at least for everything that can be done inside. Under the parasol in the garden, you would also want a little more. What bothered me, however, is that the automatic brightness control works a bit jerkily. I soon exchanged the standard dark background for a light motif because it means that the reflections on the glossy screen surface are less noticeable.

If you also use the practical touchscreen function of the screen, you should instead have a cleaning cloth on hand. Otherwise, the Surface will soon look unattractive.

His 14.7-millimetre thin laptop 4 is pretty meagre in terms of connectivity. Only one USB-C and one USB-A socket are provided for external devices. As with Apple‘s MacBooks, you can hardly avoid an adapter.

Microsoft offers a travel adapter with five connections for 110 euros and the Surface Dock 2 for stationary use for 300 euros. With third-party providers, however, you can get USB-C adapters for around 20 euros. Either way, a Thunderbolt 4 port would be desirable instead of the USB-C socket. It looks the same but can do a lot more.

When choosing my test device, I made a conscious decision to go for a model with an AMD processor. These variants are favored by the fact that they are cheaper than those with an Intel chip. They offer an average of one hour more battery life, according to Microsoft. They are also equipped with a particular variant of the AMD Ryzen processor that AMD developed and manufactured primarily for these models. That is why they are nicknamed “Microsoft Surface Edition Processor”.

In any case, the chip helped my test computer, which was very well equipped with 16 gigabytes of RAM and 1 terabyte SSD, to cope with everything involved in everyday work effortlessly. Two dozen open tabs in several browser windows were just as little a problem as the word processing available simultaneously and the teams meeting with around 100 participants.

The processor is only really challenged when playing games. Although it managed the demanding “Cities Skylines” well, the fans turned up loud. However, you can forget about graphically taxing games such as Microsoft’s “Flight Simulator”. The built-in graphics processor is too slow for them.

The Battery Can Do Something.

Microsoft specifies the battery life of my test device for up to 17.5 hours. However, this only applies to a defined usage scenario and a low screen brightness of 150 nits. If I spent a typical working day on it, with team meetings, internet searches and word processing, I got through the day well, but I wouldn’t have managed a full second.

But that’s enough for me to describe the runtime as very good. On a long-haul flight, it would certainly not be a problem to work a few hours with the Surface Laptop, watch a few downloaded films and still have enough power in the battery after landing to check the emails that have come in at the hotel.

However, it is annoying that Microsoft still equips its notebooks with its flat Surface Connect connector as a power plug. It was a good idea when it was new, but now USB-C is the better alternative because such a socket offers more options, and you can always find someone with a USB-C power supply if you forget your own at home.

In the case of my black test device, there is also the fact that the socket embedded in the bevelled side of the notebook with the likewise black plug can hardly be found in poor light.

As is usually the case with Microsoft’s devices, the keyboard is a joy for prolific writers. The relatively softly yielding keys give you the feeling of typing on a standard PC keyboard, not on a super-thin notebook keyboard.

The Surface Laptop 4 is an exemplary computer, with more than adequate performance for everyday tasks and enough reserves for graphically less demanding games. The keyboard is a feast for prolific writers, and the battery life of the AMD version we tested is perfect. The screen is also good, but it should be a bit brighter and less reflective. It would be even better if Microsoft upgraded the next version to Thunderbolt 4 sockets and said goodbye to the in-house charging port.

In the 15-inch version, the device is still comparatively light at 1.5 kilograms, robust with its metal housing and quite chic in matt black. From my perspective, there is no reason to resort to one of the more expensive and less durable Intel versions instead. Because they are smaller, lighter and cheaper, the 13.5-inch versions could be an alternative.