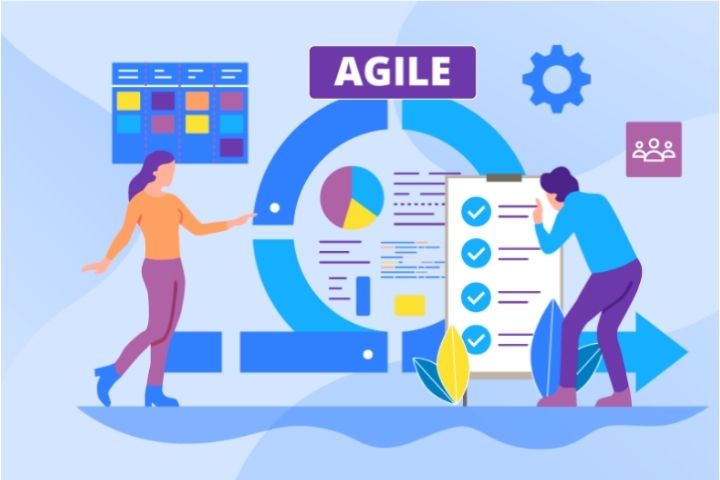 Inflexibility, especially in classic software development, paralyzes the project and makes it expensive. With agile methods such as Scrum, a large project is broken down into small ones and tasks run cyclically, errors can be avoided, and processes can be made more efficient.

The classic waterfall method can be compared to building a house: the foundation is laid, then the walls are made, and at the end, the roof comes. If errors are not discovered directly during an ongoing phase, it is often difficult to correct them.

So it’s no wonder that there has also been an increasing number of very conservative positions. Companies Challenge traditional software development in the last few years. The motivation is clear: Agile methods promise better quality in a faster and more cost-effective project process. Because agility means that parts of the product (increments) are continuously delivered in regular cycles (iterations), the individual subsections make it possible to identify and eliminate errors at an early stage.

A linear process model in software development, on the other hand, only allows individual, consecutive and defined phases. The phase results always apply as binding specifications for the next stage – each must be completed entirely so that the next can begin. Due to the limited possibility of subsequently changing the results of phases that have already been completed, only a little flexibility is possible in response to changed requirements.

This is particularly problematic with long-term projects because the requirements and framework conditions can change here frequently. An additional, aggravating workload lies in the comprehensive documentation of the processes and results. The project is often delayed or becomes more and more expensive. If there were an alternative that you could do differently – you would surely choose it. Agile methods such as Scrum and Kanban offer this flexibility.

Detect And Fix Errors During Runtime

At the beginning of the agile cycle, a few essential functions can be continuously added or removed again during the project period. The competitive situation often changes during an ongoing project – with the conventional waterfall method, the team no longer has the opportunity to intervene at this point. This is different in agile projects: Errors are discovered and corrected during runtime. The empirical values ​​also increase rapidly due to shorter cycles.

Targets are common in many companies – and you want to plan early and know whether you will achieve your goals. In addition, you will be used to receiving project plans or status reports from your colleagues; there are probably regular status meetings as well.

But hand on heart: Do you know how things are going with your project’s ability to deliver? Are the remaining times that are being estimated correctly? In my experience, you are not in 80 percent of the cases with the waterfall method. Agility allows product defects or a wrong approach to be recognized at an early stage of the project and rectified.

For the success of development projects, efficient and straightforward communication is just as important as the technologies used. Therefore, Scrum teams should work as close as possible to the user – they often work directly on-site at the customer. The cross-functional teams can resolve misunderstandings in no time, and details can be clarified now, saving time.

And: With agile projects, you achieve a real competitive advantage. Because the short communication channels with the developers also mean that the system is completed earlier. Agile projects are usually simply faster than projects that run in conventional development cycles.

A Strong Team That Works Together

Working agile also means giving the Scrum team a free hand in making decisions. In this way, your employees organize themselves to a large extent towards the specified goal and resolve any problems among themselves. This not only promotes team cohesion but also rules out envy. In addition, the short development cycles lead to an immediate sense of achievement – the result cannot only be read on the finished product.

The only barrier on the way to agile work is usually the fear of uncertainty. Constant further development requires change processes that are always accompanied by a learning process. But it pays to break new ground: Agile project management methods promise more efficient operations, more motivated employees, and happier customers.