HomeGADGETSEcho Show 10 In The Test: Amazon's Twisting Thing Can Do That.
GADGETS

Echo Show 10 In The Test: Amazon’s Twisting Thing Can Do That. 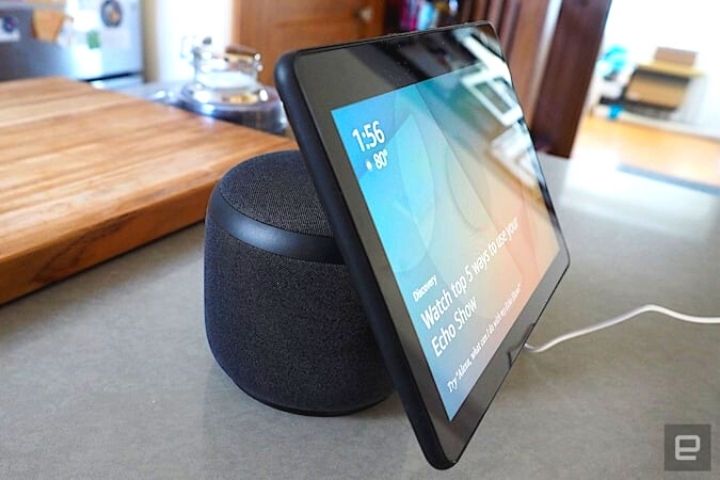 The new bright display from Amazon is always looking after you – if you let it and don’t find this function creepy. The test clarifies what else the device can do.

A computer analyzes your movements, follows you and aligns itself with you: If this idea disturbs, irritates or scares you, you can stop reading here right away. Because exactly what is described makes the Echo Show 10 special. With the help of its combination of camera and microphones, the Amazon device tries to understand who is where in the room and to orient itself towards it, at least as far as it can.

Because the device is not a robot, it doesn’t have legs or wheels to move around but stays where you put it. Only the screen that protrudes from the impressively massive loudspeaker housing can rotate almost all the way around if you let it. If desired, the rotation function can also be switched off, and if that’s not enough, you have the option of pulling the integrated flap in front of the camera. Then the Echo Show 10 is blind, and the tracking function is deactivated.

Incidentally, reassures Amazon, the camera image for the function is converted into an abstract representation of corners, edges and colours and analyzed with artificial intelligence on the device itself. Neither data would be uploaded to the cloud, nor original images would be saved.

A screen that is always aligned with its user could be helpful in everyday life, for example, if you move around in the kitchen and keep an eye on what is happening on display. And that can be a lot. To stay with the kitchen example, recipes like those from Chefkoch.de and Kitchen Stories could be displayed and read aloud. Or you could watch an episode of “Scrubs” on Prime Video while you cook. Netflix, YouTube or Arte can also be controlled via the Echo Show 10 if you like the connection between television and cooking at all.

Amazon also sees the possibility of moving freely in front of the device during a video chat and still staying in the picture as a big plus. To do this, however, you have to rely entirely on Amazon devices and apps because popular video chat apps such as Zoom and WhatsApp cannot be used. In theory, Skype should work, but it failed on my test device, as did the address book, which crashed every time I tried to open it without an error message.

In any case, the use of the rotating mechanism needs to be well planned. There is even a template in the box that you can use to mark out the radius the Echo Show 10 needs for a complete turn. In my unfortunately much too small kitchen, there wasn’t enough space for that, the Echo had to take place on a shelf – and immediately offended. Fortunately, you can limit your range of motion for such cases.

I did not find the automatic swivelling of the screen particularly useful anyway. It may be different if you place it on a table or sideboard in the middle of the room and use it from one direction or the other. Then you have to put up with the fact that the Echo Show 10 rotates its display noiselessly, but also a little slowly. This is nothing for hectic people.

Apart from the rotating screen, the Echo Show 10 is just a typical Echo device, which you can use to address Amazon’s artificial intelligence Alexa if you want to know how far away the moon is or how many grams a kilogram is. The new Echo also does such tasks in the usual good and an equally wrong way. He can do a lot, but he doesn’t understand what you mean when you ask for a recipe for Kokkinisto.

Smart home devices can be controlled with the Echo Show 10 by voice command, and the appliance can also display images from electronic doorbells and surveillance cameras. They always provided that the devices are Alexa-compatible. A small Zigbee hub is also integrated, via which devices such as Philips Hue lamps can be networked.

The 10.1-inch screen shows solid colours and is bright enough for indoor use. The loudspeaker system consisting of a woofer and two tweeters sounds pleasantly transparent and can be very loud. It is noteworthy that the two tweeters are permanently moved with the display, i.e. align themselves to the user. As is no longer unusual with smart speakers, the sound is automatically adapted to the respective room. In addition to Amazon Music, Spotify, Apple Music, and other providers can be used to listen to music.

Above all, the rotation function of the Echo Show 10 is a nice gimmick. It is more important than the sound of the device is good, which makes it an excellent kitchen radio that can also read recipes and look up the weather forecast.