HomeGADGETS"Ready For" Technology Being Tested -Motorola Wants To Turn The Cell Phone...
GADGETS

“Ready For” Technology Being Tested -Motorola Wants To Turn The Cell Phone Into A Home Office. 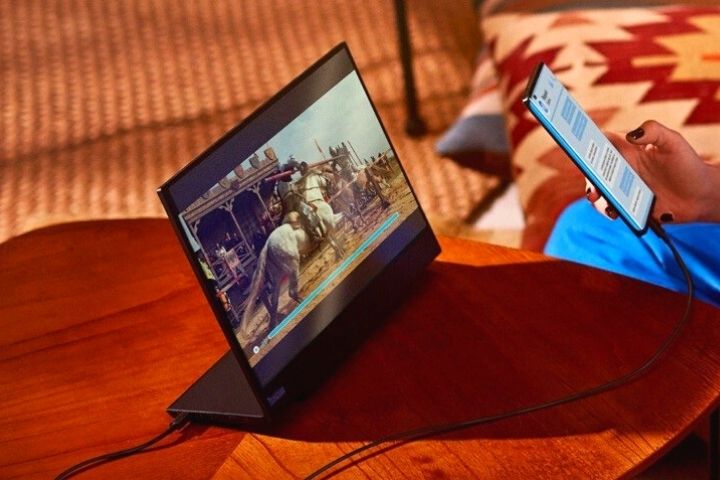 The new Moto G100 from Motorola is supposed to be a smartphone and a mobile PC at the same time. Our test shows that what sounds good is a bit fiddly in practice.

Some smartphones are now so powerful that you get bored with apps like WhatsApp and Instagram. Samsung, for example, has been maintaining a system for years with “DeX” with which you can connect your mobile device to a screen or the display of a notebook and then use it as a mini desktop PC. This is precisely what Motorola wants to offer now.

Well, that’s a bit of an exaggeration. The G100 impresses with the fact that it offers a lot for 500 euros. For example, an eight-core processor from Qualcomm, which would have been top-of-the-line last year, but is now sufficient to keep the smartphone from sweating, not even when doing office work.

The display is large enough at 6.7 inches and has a sufficiently high resolution of 2520 x 1080 pixels. It is usually bright enough and shows realistic colors in the “Natural” color mode. The main memory is well equipped with eight gigabytes (GB), the storage space of 128 GB is sufficient for basic requirements, significantly since it can be expanded.

Radio modules for 5G and Wifi 6 are also built-in. The battery life in continuous operation at full brightness of twelve hours is sufficient to get through a typical day. It is not so pleasant that the device is only protected against dust and water by IP52. It should withstand light rain, but not necessarily a bath in a water glass.

The impressive camera structure on the back promises more than it can deliver. What looks like a quadruple-camera is actually a 64-megapixel wide-angle camera and an ultra-wide-angle and macro camera with 16 megapixels. At your side are a depth sensor, which is essential for portrait photos, for example, and laser autofocus.

The image quality when taking photos is good to excellent in good lighting, as long as you can do without the missing telephoto lens. Motorola’s photo app is easy to use and offers a few exciting extras in addition to the macro function. With the “spot color,” for example, all but one of the colors are converted to gray levels. The G100 records videos in up to UHD resolution with 60 frames per second smoothly and without visible pumping when the brightness changes.

Also Read : Samsung Galaxy A32 5G And Realme 8 Pro In The Test Showdown In The 250 Euro Class

A Lot Of Fiddling In The Home Office

The box the G100 comes in is impressively large. Contrary to the trend, Motorola supplies not only a cable but also a power supply unit. Also, a cable is included to connect it to a television or projector via HDMI, for example, to watch films. Most of the space is taken up by the docking station, into which the cell phone can be plugged in for charging and video chats.

It also serves as a connection point to the screen if you want to use the G100 as a PC replacement, true to the motto “Ready For.” However, this requires a lot of accessories, including cables and a little patience when assembling.

Motorola sent me a display (Lenovo ThinkVision M14t, approx. 300 euros), a USB hub (71 euros), a mouse (17 euros), and a multimedia keyboard (59 euros) from the PC manufacturer’s range for the test Xbox game controller from Microsoft (50 euros).

When I tried it out, I made the experience that you should only use the supplied straps. My attempt to establish the connection between the docking station and display with my high-quality cable, for example, failed.

But if everything is correctly wired and switched on, a selection screen appears on the display and smartphone on which you can choose whether you want to chat, play, watch TV or switch to desktop mode.

Once you have decided here, two things stand out: On the one hand, although all apps can be opened to the size of the display, not all are adapted to this, such as YouTube. On the other hand, the G100 has no trouble controlling the much larger screen.

The Android game “Real Racing 3”, for example, runs as smoothly on it as it does on the mobile phone itself. Even films from Netflix or Amazon Prime Video do not cause any problems, and if you like, you can use your smartphone, upgraded to a pseudo PC, for that use amusing things like word processors and spreadsheets. You will hardly notice a difference to a notebook with Google’s Chrome OS, at least not in terms of performance.

However, it is annoying that the docking station’s fan runs permanently. At around 40 decibels, it is not particularly loud, but it still creates permanent background noise. Also annoying: after extended breaks in which the smartphone switched to sleep, the cell phone lost contact with the mouse and keyboard. Most likely, Lenovo’s USB hub is the cause of these problems. Anyone interested in such a system should probably choose a different hub.

Overall, the Moto G100 is a good smartphone. The purchase is primarily worthwhile if you can use the supplied accessories, i.e., the HDMI cable and the docking station. Because the device also cuts a fine figure as a PC replacement, as long as you don’t rely on Windows.

But I wouldn’t consider such a solution to be exceptionally mobile, because you have to carry too many cables and accessories with you and plug them together for work. This won’t work on small tables in planes and trains. At home, it looks different if you leave the whole set-up hardwired and plugged in your cell phone when you get home.

It is fascinating how easily even a mid-range smartphone like the Moto G100 can take on the role of a computer. His “Ready For” technique is not a solution for everyone. For the price of the Lenovo display sent to me, you could buy a usable Chromebook.