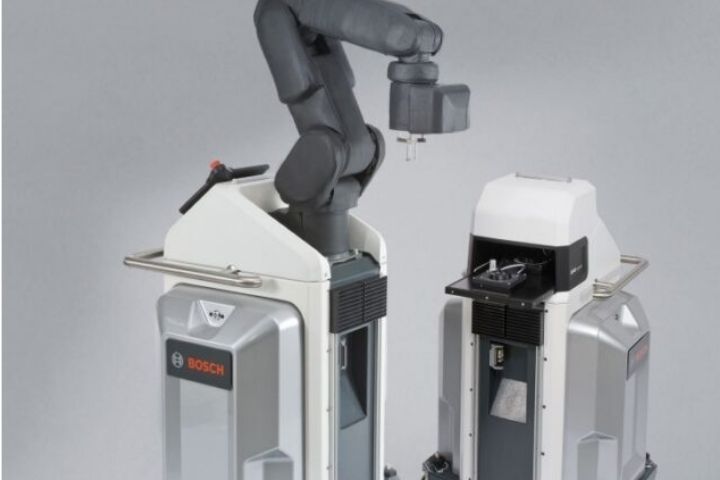 Industrial robots have to be very fast and extremely precise. However, highly dynamic motion sequences stimulate unwanted vibrations. This means that there is either deviations inaccuracy, or it has to be driven more slowly. A damping actuator can help.

Traditionally, industrial robots were mainly used for handling tasks. This area is still the central area of ​​application today. It is usually sufficient to reach the programmed target point with high accuracy and the shortest possible time. Keeping a given path there is of secondary importance.

In recent history, however, industrial robots have increasingly been used for tasks in which it is essential to maintain the programmed path, i.e., the dynamic path accuracy. Examples include laser seam welding and milling.

However, industrial robots suffer from a particular susceptibility to vibrations due to the serial structure and the low rigidity compared to machine tools. This results in an unwanted loss of accuracy. This is often counteracted by specifying less dynamic movements, which increases the duration of the action. In this respect, there is a trade-off between accuracy and speed.

The accuracy deviations at the tool center point (TCP) result from the robot axes’ errors and the structural members’ flexibility. Usually, the variations from the axes are more significant than those from the structure. In the case of 6-axis articulated arm robots, axis 1 is mainly to be mentioned as the most important cause of errors. There are several reasons for this. On the one hand, the gearbox with the most considerable gear ratio is installed in the axle, i.e., deviations due to manufacturing tolerances are geared up to a greater extent compared to the other axles. In addition, these deviations are most significant due to the most extended lever arm from the axis to the TCP. On the other hand, when the robot is set up as standard, the axis is parallel to the gravitational axis.

Against this background, an approach for the semi-active damping of robot systems is being researched at the Institute for Control Technology for Machine Tools and Manufacturing Units (ISW). Here, a damping actuator integrated into axis 1 of the robot (see picture) is used to dampen any axis vibrations by applying the brakes as required. Targeted braking interventions are only carried out in the event of oscillation to dissipate existing oscillation energy dissipatively.

The semi-active character ensures that only braking and no accelerating interventions are carried out. The axis’s input and output encoder signals (direct and indirect measuring systems) are used to detect vibrations and decide the amount of braking force. Not all industrial robots have a natural measuring system, but one can easily be retrofitted, or the encoder signal can be reconstructed using model-based approaches.

The damping actuator not only improves the system properties significantly. The robot is considerably less susceptible to vibrations and is easier to control. As a result, the control of the robot axis can be designed to be significantly more dynamic without the risk of instability. It follows from this that the specified path is better adhered to. This, in turn, is directly linked to a higher level of accuracy. Alternatively, the improvement achieved can also be used to make faster movement specifications while maintaining the same precision, thereby reducing movement duration.

The graphic shows the results of a point-to-point movement. It can be seen here that the specified path (blue) is adhered to much better on the one hand, and vibrations are corrected much faster on the other.

The bottom line: Although industrial robots are more susceptible to vibrations than machine tools, they can also be used for tasks with the help of suitable measures in which adherence to a specified path is essential. One possible approach is the semi-active damping presented in this article. This directly improves the path accuracy but can also be used indirectly to increase the movement dynamics.

Also Read: It’s All About Culture: This Is How Companies Master Digital Transformation