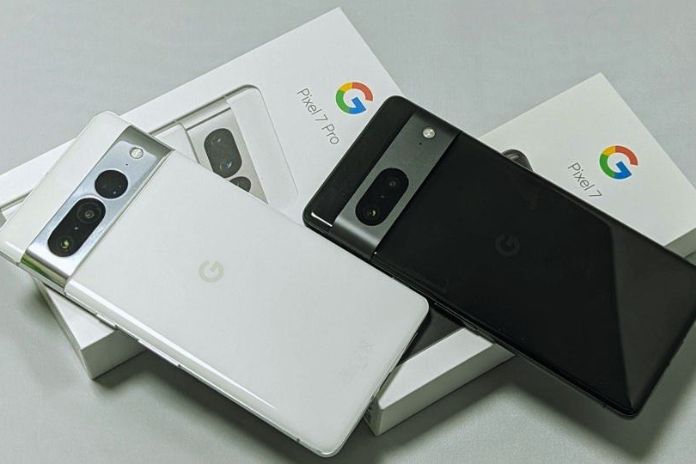 While the basic variant has a starting price of 649 euros, the Pro variant can be purchased from 899€. Both models are already available for purchase on the official Google store and at partner e-tailers such as Amazon If you pre-order the Pixel 7 Pro before October 17, Google is giving away either a Pixel Buds Pro or a Google Pixel Watch.

With a 6.7-inch curved display, the new Pixel 7 Pro is still a great smartphone. With an aluminum casing made from 100% recycled materials, the Pixel 7 Pro has had some subtle changes from the previous generation’s design.

The new Pixel 7 Pro is available in three colors: Snow, Obsidian, and Hazel hue. However, like last year, the prettiest colorway, the Lemongrass variant, is reserved for the base model.

Contrary to what Google claims, we can’t discuss a design overhaul compared to last year’s Pixel 6 Pro. Only a few changes in the materials and the look of the photo module should be noted. The face of the Pixel 6 Pro was already very successful and made it stand out from other high-end smartphones that all look a little alike.

The only notable change is that of the famous camera bar. Entirely in glass on the previous generation, it is now in aluminum on the Pixel 7 Pro. We like it, or we don’t, but it’s a more robust design and, therefore, more durable than 100% glass. Another positive is that the range has retained the IP68 water and dust resistance certification, which, together with five years of security updates, makes using this model over the long term even more attractive. . However, I find that the grip leaves a little to be desired because the smooth glass on the back is much too slippery.

Another component we haven’t seen much change to is the display – which isn’t a problem given that the display in the Pixel 6 Pro was already excellent. The Pixel 7 Pro’s screen is still 6.7 inches in 19.5:9 format, with QHD+ resolution and a refresh rate of up to 120Hz.

Once again, Google has chosen to use the Gorilla Glass Victus and rely on the durability guaranteed by the Corning brand. Regarding the brightness, the Pixel 7 Pro screen reaches up to 1000 nits (HDR) and 1500 nits (peak). I liked the colorimetry and brightness of this screen, and consuming content on this device is simply a treat. Despite my current preference for flat screens, the fewer curved edges on the Pixel 7 Pro are a plus point over the previous generation.

Software-wise, the Pixel 7 Pro runs on  Android 13. The most recent version of Google’s mobile OS offers a series of customization options and advanced security features, which allow even more control over the hardware components of the smartphone. And with the Private Computer Core, the processing of personal data takes place locally, i.e., on the smartphone itself. Added to this is pretty extensive software maintenance.

The Pixel range has unique features like the audio transcription application or Live Caption. However, this voice input technology, combined with Google’s natural language learning models, is applied in other areas of the system. With the announcement of the new Pixel 7 and 7 Pro, the audio transcription feature is integrated directly into the Messages app and, in theory, should offer a transcription of voice messages sent between users.

However we tried using this new feature, but even between two Pixel 7s with the latest version of Google Messages, we couldn’t get it to work. It was pretty frustrating. Another Google Assistant voice input feature to recommend emojis didn’t work. However, the intelligent instant translation or image recognition features via Google Lens are top-notch. Finally, new models will receive up to three years of major Android updates and five years of security updates. This means that after launching Android 13, it should receive Android 16, which is expected to arrive in 2025.

One of the main differences between the generations of the Pixel line is in the processor. The Tensor G2 SoC improves major subsystems and optimizes Machine Learning (ML) functions, such as natural language. The good news is that the performance turned out to be pretty solid.

In the Tensor G2 SoC, we find the tri-cluster layout 2x super-big ARM Cortex-X1, 2x big A76, and 4x small Cortex-A55. The Pixel 7 Pro comes in 128, 256, and 512 GB UFS 3.1 storage variants and 12 GB LPDDR5 RAM and is backed by the Mali-G710 GPU. Except for the latter, the CPU layout is similar to the first-generation Tensor SoC and shows in the benchmark results. In the above context, the Tensor G2 lags behind recent models from Apple, whose chips are manufactured by TSMC.

By comparison, Google’s chip is manufactured by Samsung in a 4nm process. However, despite very different benchmark results, day-to-day experience with the Pixel 7 Pro has proven to be very solid. The device did not overheat at any time, even during gaming sessions lasting more than 60 minutes or almost two hours of camera testing, with resource-intensive post-processing. Regarding data security, the Tensor G2 processor works with the Titan M2 security chip, which provides an extra layer of protection against complex attacks. Still on security, one of my biggest criticisms of the Pixel 6 Pro last year was for the most basic security feature: biometrics for screen unlock.

On paper, the Pixel 7 Pro’s photo module doesn’t differ much from the one we got in the previous generation. We have a set of three lenses, with the focus on the 48MP telephoto lens, capable of capturing images at 5x optical zoom. On the other hand, the 50 MP primary lens can capture 12 MP images using the pixel binning technique. Google has retained the 1/1.31-inch, 1.2µm sensor from the previous generation, with an f/1.85 aperture and optical stabilization (OIS). Finally, the ultra-wide-angle lens has 12MP, an f/2.2 aperture, and 1.25µm pixels, with a field of view of 125.8 degrees. This component has been slightly updated from generation to generation, has autofocus, and captures macro images with more quality.

On the front, we have a 10.8 MP sensor, which can capture images with an ultra-wide angle field of view. This same camera is used for the screen unlock function by facial recognition.

In well-lit environments, images captured with the Pixel 7 Pro’s camera are crisp, with balanced brightness and colorimetry, and even with heavy background image processing, they remain natural. Controlling exposure, contrast, and white balance on the screen allows us to be more creative when creating a shot. Much like the previous generation, the Pixel 7 Pro’s lens array allows it to be versatile in capturing images, offering everything from macro shots to an absurd 30x zoom. And that’s one of the great strengths of the Pixel range, relying on software to overcome hardware limitations.

The Pixel 7 Pro can operate a 5x optical zoom with its telephoto lens. The magnification can go up to x30 in digital. This feature, called Super Res Zoom, is aided by new machine learning (ML) models in Tensor G2. From 2x zoom, the Super Res feature crops a 50MP image from the primary camera to deliver a 12.5MP idea, providing greater pixel density than before. For other distance ranges, this process is scaled to provide an even sharper and more detailed image. From 15x zoom, zoom stabilization is used to identify objects and stabilize the camera. You can see it in the left corner of the camera app screen.

When we trigger the 20x zoom, the Super Res technology produces a photo using data from all three cameras in conjunction with the Tensor G2’s ML models. In practice, the results are very variable. I notice that the greater the distance to the object, the more stunning the result. And, of course, the quality drops dramatically. However, even a 30x zoom can sometimes be fully exploitable. Google also offers new editing functions like “Unblur,” which promises to restore the sharpness of images taken from Google Photos. However, the improvements have been quite subtle, if not inconsistent.

As for the video feature, Google has added the Cinematic Blur feature to record videos with a blurred background. Unlike Apple’s solution, which offers Cinematic mode on the front and rear cameras, Google limits the use of Cinematic Blur to the rear photo module only. As with Apple, it is also impossible to modify the focus in post-production. In the examples below, you can see how unstable the focus is, especially when objects move in front of the lens. When my colleague Antoine and I move around, the focus blurs markedly. In the studio, however, when placing an object directly in front of the camera, recognition of things, in principle, is smoother.

With a capacity of 5000 mAh, the Pixel 7 Pro offers battery life that can last all day without you having to worry about recharging the device overnight.

Last year, the battery life of the Pixel 6 Pro proved to be problematic, especially after a series of problems related to a software update. Fortunately, the Pixel 7 Pro showed no issues at this level. The Pixel 7 Pro clocked in at 14h35min of battery life using PCMark’s battery test as a benchmark. However, despite the excellent autonomy, the so-called fast charging takes up to 40 minutes to recover 43%. For a full charge, it took 100 minutes during my test. Also, on charging, Google says the device supports a 30W charger. However, the Pixel 7 Pro battery only accepts a maximum charging power of 23W. The Pixel 7 Pro also offers Qi and reverse wireless charging.

After the Pixel 6 Pro setbacks last year, Google no longer had the right to make mistakes with the Pixel 7 Pro. And, on paper, the mission is relatively successful.

The big highlight of the Pixel 7 Pro is the Tensor G2. This test shows that the performance is similar to the previous generation but more solid. Using new machine learning models, the new SoC also offers a host of new features regarding computational photography, where the Pixel 7 Pro has once again proven to excel.

However, we couldn’t test many new software features, such as the Cinematic Blur feature, because they weren’t immediately available or didn’t work well. Google is still in its infancy in terms of hardware, but on the software side, the manufacturer must be beyond reproach. I’m still struggling to see Google breaking the Apple and Samsung bubble in the smartphone market. But the Pixel 7 Pro is the best smartphone that Google has produced.