The Internet Is Getting To Work Faster And Faster 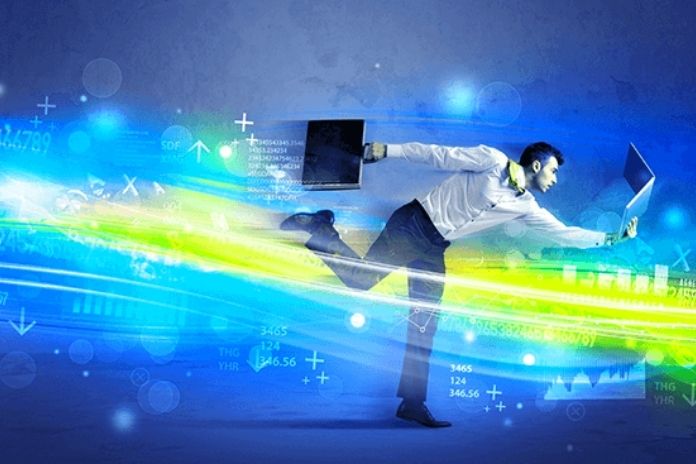 Surfing the Internet is part of everyday life, at home and work. “Outdoor” is now also widespread, and it is also getting faster and faster, for example, in the ICE with LTE and even at “Tempo 300”.

“Hotspot” is written in white on pink next to more and more entrance doors on ICE trains. If you take a seat there, you can make your trip entertaining via the Internet or – a plus for business travelers – set up your mobile office. There are tables with a socket for the laptop and the possibility to use the Internet. Behind this is highly sophisticated technology because the ICE is traveling at 300 km / h in parts and disappears again and again in the tunnel.

In the French TGV and Thalys, the data signals go via satellites, which would lead to constant interruptions in the topography and was therefore ruled out.

For the “train-land connection” (ZLV), the transmission network of the Telekom is used, which requires additional antennas along the railway lines as soon as the tracks leave a densely populated and, therefore, well-developed area. The transmission network must be expanded accordingly to ensure uninterrupted supply. Villages in the area also benefit from this expansion of the mobile network.

Because of the reflection on the walls, it is particularly difficult to “illuminate” longer tunnels. The connection must not “break” when the train moves to the next radio call at high speed. If a malfunction occurs with the precisely aligned antennas, it cannot be remedied quickly as it is in the open air, but only when the train traffic has stopped, and it is safe to work in the tunnel – usually at night.

For data transmission, Telekom continues to use UMTS, which offers the bandwidth for high-speed Internet. Since the beginning of 2012, the new LTE (Long Term Evolution) cellular technology has been increasingly used, with which data is transmitted between the line and the train at 50 Mbit / s in the 800 MHz range 2 Mbit / s. Thanks to the greater range of LTE with a radius of around 10 km, fewer antennas along the route are sufficient, and transmission stability is increased because the number of interfaces between the radio cells in a route is reduced.

The car body provides the greatest shielding, plus the steamed windows. Without amplification, mobile radio signals are severely inhibited, and the flow of data decreases. Thanks to the built-in cellular repeater, the signal for the mobile phone is amplified, and train travelers can already make phone calls on large sections of the route in the ICE.

To offer internet access via WLAN, the cars need a signal amplifier and an external antenna located on the roof. It receives and sends data signals between the fixed UMTS / LTE cellular cells along the route and the train. In the ICE, they are routed via a central computer, amplified by repeaters, and distributed to the vehicles provided for this purpose. As is the case with mobile phones, there are also quiet areas without this equipment.

The interaction of the extended cellular network and transmission technology in the train and along the route forms the hotspot, the “hot spot” where Internet use should be comfortable and reliable. There are such hotspots in many places. At Telekom, the name is also the brand name.

DB passengers connected to the Internet for the first time on December 10, 2005, on the train. At that time, seven ICE trains of the 3rd construction series and the Cologne – Dortmund route were initially equipped to enter the new service.

The communication technology in the trains, their connection to the stationary systems, and the service and billing are the responsibility of Telekom.

After this entry-level project, planning for the series equipment of the ICE 3 fleet began in 2006. By 2010 every ICE should have internet access. The fact that it takes twice as long is less due to the technology than to the considerable costs of this service, which is by no means a matter of course, even in the Internet age. Almost 100 ICE trains and 3000 km of routes are currently equipped for internet service; by 2014, there should be 250 trains and more than 5000 km of route.