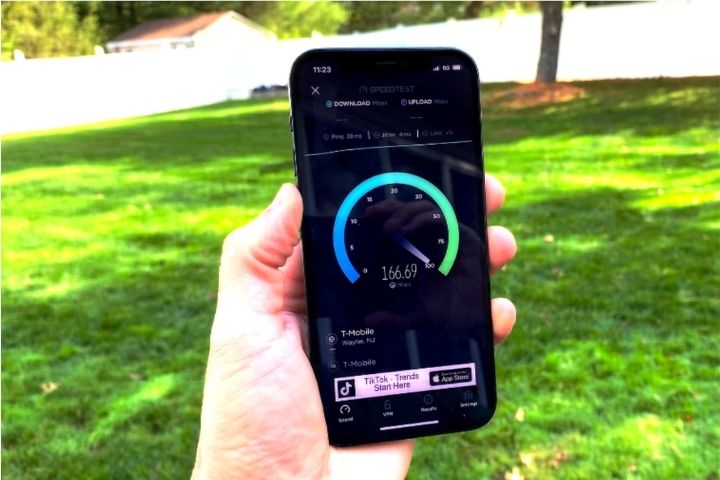 Network providers are massively promoting the new 5G cellular technology. But the benefits of the fast network for private users have so far been limited.

Don’t miss anything now. After all, the network of the future is no longer just at the door. It is already here. Almost all new cell phones from large and small manufacturers can handle it, from Apple to ZTE. And the mobile phone providers are drumming for the new network. You want to be part of this revolution, don’t you? The question that remains, however, is what the fabulous 5G brings for private users.

Much has already been written about this fifth generation of mobile communications, and real miracles are expected. It should react in no time at all, be able to send up to 20 gigabits per second of data over the airwaves and thus guide autonomous cars safely over the streets and direct the robotic ballet in factories. And and and.

However, the fact that 5G technology was not primarily designed for private users could cause some disillusionment among excited cell phone owners. Yeah, not even for humans. 5G is primarily a network that takes the communication between machines to a new level. The fact that people can still use it is a secondary aspect.

The Short Response Times Are Particularly Advantageous In The Industry

Therefore, the most significant effect of the new network will be felt in the industry where it is becoming more and more critical that machines do not just spit out any products, but that they also produce data about them, lots of them. They are exchanged, processed and checked for abnormalities. From the entire machine park in a factory, there are so-called digital twins with which you can run through new scenarios and optimize existing ones without the real machines having to run.

Radio technology like 5G makes this a lot easier. It offers the short response times you need for this but does not require any cables and can be implemented comparatively quickly. A box the size of a shoebox under the ceiling lightly illuminates a regular workshop.

For people who want to communicate with their smartphones, 5G does not significantly improve, especially in the current state of expansion. This has technical reasons, but also other causes. Technically, it looks like that on most of the masts that light up the 5G symbol on suitable cell phones, 5G is still handled using the previous 4G technology. The connection is established via 4G; then, the download takes place via 5G.

This is usually not faster than 4G, but 5G is more efficient and requires considerably less energy than 4G per amount of data transferred. You can’t make calls over 5G anyway. In addition, 4G and 5G often share the transmission capacity available at the respective location, dynamic spectrum sharing (DSS) is the technical term for this. If there are many data-hungry 4G users on the go, this also limits the transmission rate of 5G users.

Only at locations where 5G has been expanded as a stand-alone technology is a route via 4G no longer available. Users can get higher data rates – always provided that not too many other 5G users have just had the same thought and, for example, come up with it. Download a large game or watch the stream of a live event. The seemingly fantastic data rates of 20 gigabits per second only apply under ideal conditions for the individual user.

Aside from the technology, the use of which for private users is limited, at least at the moment, there is also the question: What large amounts of data should a private user download all the time so that 5G is worthwhile? It’s not cheap either. There are now contracts that also allow generous use of data, but they are still relatively expensive. That could change when 5G is so well established that it can easily be used in companies, for example, as a replacement for fixed cabling. That would also change and make office organization easier.

But that will take time. Germany wanted to be at the forefront of the 5G expansion after falling behind the previous generation. But with the auction, at which the network operators had to shell out billions again for the use of the frequencies, the foundation stone was already laid to ensure that things will not go so quickly. This money is missing from Telekom, Vodafone and Telefónica (O2). In addition, there is uncertainty surrounding the Chinese provider Huawei. Are they allowed to participate or not?

So 5G is still barely able to exploit its much-vaunted advantages. This applies not only to the increased data rate but also, for example, to the possibility of virtually splitting the network into subnetworks. In general, 5G will also mean that the established network technology providers will have to dress warmly. Virtualization is an essential topic in the new network technology. Because many things no longer have to be done with their proprietary systems but can also be done with standard hardware plus suitable software, they come under pressure because the cloud and computer world players are suddenly becoming competitors.

But while the 5G expansion is still in its infancy, the successor technology 6G is already being worked on. Experts like Ivan Ndip from the Fraunhofer Institute IZM even go so far as to say that 5G will not fulfil everything expected of the technology. For example, even the transmission rates of 5G are still too low for operations by robots controlled remotely, believes Ndip. Very high-resolution video images would have to be transmitted, and there should only be minimal delays. His conclusion, which he expressed in an interview with an electronics specialist magazine: “6G should meet the expectations that 5G has aroused.”