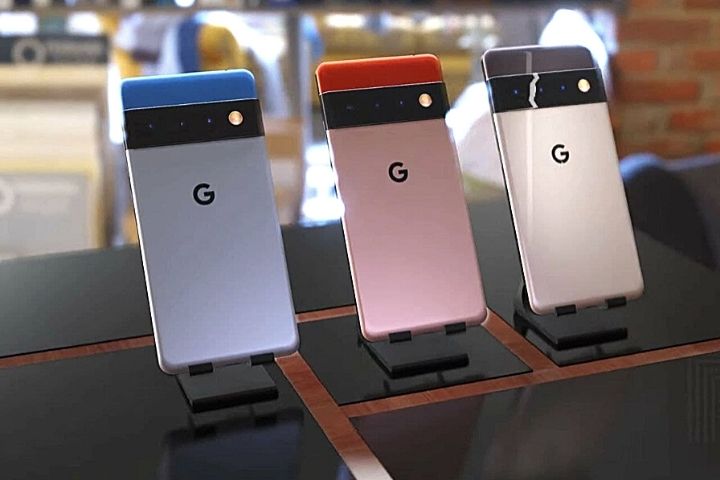 Google is refreshing its Pixel range this year with a completely new design and new cameras. At least, that is indicated by an extensive leak on the Pixel 6 from a very serious source.

Google has chosen a mostly inconspicuous design for its Pixel smartphones in recent years, such as the last Pixel 5 (test). The manufacturer seems to be pursuing a new, less conservative design approach this year. Render images based on real photos published by the well-known leaker Jon Prosser suggest a striking design.

One of the most striking design features of the upcoming Pixel 6 will be the rear camera element, extending horizontally over the housing in the upper area and looking out a little. The camera hump is different from the rest of the case in terms of color: while the back of the model captured in rendered images was wrapped in pastel red tones, the camera hump is black.

Whether the camera hump on the real model will protrude far out of the housing remains to be seen. It is possible that the transfer from the fed photos to the rendered images could be imprecise.

Another design change of the new models will be the use of an in-display fingerprint sensor. With this, Google should again say goodbye to the fingerprint sensor on the back, used in last year’s models. In the 2019 Pixel models, Google installed a 3D scanner that can be used to unlock devices such as Apple’s iPhones with the face.

With the Pixel 6 and an expected larger model with the addition of Pro, Google also seems to be saying goodbye to the camera sensors that have been in use for years. At least that’s what the thicker camera hump suggests, and a third camera in the Pro model. It is unclear to what extent the cameras will differ from their predecessors and the two Pixel 6 models.

Pixel 6: Another Source Confirms The Design

Prosser is considered a fairly reputable source, which has attracted attention in the past few months mainly through leaks in the Apple area. Still, it is always better to get further confirmation of authenticity from another source. With the Pixel 6, it comes from another leaker with a good hit rate: Max Weinbach, who appeared last year mainly through leaks with the iPhone 12, confirms the design of the Pixel 6 models. However, the colors shown on the rendered images should not be completely correct.

Also Read : Android 12- You Can Install The Beta On These Smartphones

Pixel 6 With Google’s Own Whitechapel Chip

According to older leaks, the new design should be accompanied by at least one other major change: The Pixel 6 and 6 Pro will most likely appear without a Qualcomm processor. Instead, it is expected that Google will install its chip, which is making the rounds as the Whitechapel and GS101.

With an in-house processor, Google could coordinate hardware and software better, just like Apple, and improve performance and runtime. In addition, it would be conceivable to massively extend the period for Android updates since Google would no longer be dependent on chip developers such as Qualcomm for development. So far, there have been a maximum of three major Android updates; in December 2020, Google and Qualcomm announced a period of up to four years for new chips.

It will be a while before the new pixel models are officially presented. In recent years, Google had presented its top models in the fall to be delivered from the factory with the new Android version. Since Android 12 will not be released until late summer or autumn, we are again assuming a similar period this year. However, it is entirely possible that Google could give us a foretaste of the new pixel design beforehand.