HomeTECHNOLOGYAugmented Reality In The Car
TECHNOLOGY

Augmented Reality In The Car 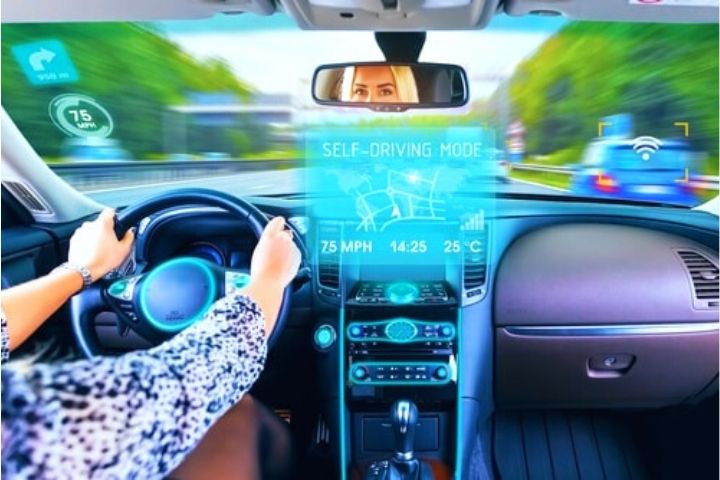 When it comes to providing drivers with relevant information about their surroundings, Augmented Reality (AR) will play an essential role in the future.

Augmented Reality (AR), the superimposition of reality images with virtual animations, is known from games such as Pokémon Go. But the technology is also finding its way into motor vehicles. There are various exciting applications: wearable technology, head-up displays (HUD), or even the vehicle’s windshield as an accurate, semi-transparent display. The difference between the last two options is that a HUD can only be seen by the driver and only from a certain angle, while with the new “smart” windshields, each occupant can see an accurate picture. The aim in each case is to provide the occupants with relevant information.

AR as an additional output modality, combined with various input modes such as speech, gaze tracking, and gesture recognition, improves user-friendliness and offers easy access to a wide range of information. In the car, this could be sensor information, for example, to illuminate the blind spot, or it could simply be access to information such as our phone’s contact list. The advances in display technologies and connection with the Head-Up Display (HUD) and AR are proving to be trend-setting to provide information.

Read Also : 7 Points-How To Get A Handle On IIoT Data Integration

There are typically two basic types of displays that can be used for augmented reality applications: Wearables and the displays integrated into the car. Wearable AR works with glasses that can put additional information about the world we see. This approach can seamlessly switch between different scenarios and add context to the environment regardless of where the user is. For example, a user can park his car in a parking garage in a strange city, and the glasses then guide him directly to his final destination.

But the wearable approach not only has advantages; glasses can be a nuisance while driving. In addition, it is an additional device that you have to carry along with everyone else in everyday life. There are also approaches to integrate the projection surface for AR into the vehicle itself. There are two different options: video-based and windshield-based augmented reality or head-up displays. Video-based AR systems use the image from the vehicle’s front-facing camera and lay an additional layer of information on top of it. A famous recent example is the new Mercedes-Benz A-Class, which offers an AR-based navigation application with the vehicle’s front camera.

As described above, head-up displays and smart windshields are screens in the driver’s natural field of vision, which can provide a wide range of information without having to take your eyes off the road. The visualizations can be prepared in perspective, or they can be essential to the driver data displayed in his field of view.

AR – Ease Of Use Is Critical

Most of the advances in artificial intelligence applications provide additional input channels, such as monitoring systems in the cabin and the advanced sensor fusion functions that can process various interaction modes such as speech, gaze tracking, gestures, and more. On the other hand, AR is another output channel that can provide the vehicle user with additional, complex information in a prepared form.

An essential aspect in this context is the display surface, which has a significant impact on the choice of realizable use cases and user-friendliness: New technologies such as the “intelligent windshield” from Saint-Gobain Sekurit use the entire front window as a transparent display. As a result, the user experience can be enriched in various aspects by adding very targeted and intelligent content offers.

Augmented reality technologies can be used for many applications, particularly infotainment, safety, or comfort functions. If the focus is on infotainment, the windshield can show the user information about the visible external environment, exciting restaurants, or the offers of a newly opened café.

For convenience applications, the windshield can be used as an output channel when users interact with onboard systems or online content. This type of interaction has the advantage that the user does not have to look at the dashboard, but rather the information is displayed where the user looks, what the security elevated.

Security is not limited to just minimizing distractions. With the help of the latest sensor fusion and eye-tracking technologies, the system can select the display area according to the user’s perspective. In addition, AR can be used to direct the user’s attention exactly where it is needed. If a vehicle on the road that the user should pay particular attention to, this is where the extension can focus.

Read Also : How Technology Can Improve The Workplace At Home

The further autonomous driving develops, the more importance will also be attached to augmented Reality. On the one hand, there are many more options for entertainment and infotainment functions if the driver no longer has to concentrate on the traffic. On the other hand, AR technology can play an exciting role in providing information about the maneuvers and a general understanding of the vehicle. This can increase the feeling of security of critically minded passengers: People who are uncomfortable flying can often be reassured that they know where certain aircraft noises come from. The AR information could also have a similar effect on skeptical passengers.

The data that we collect in the world is increasing. In the future, it will be crucial that we succeed in relating them to Reality in such a way that they generate the most significant possible benefit for people. AI-based analysis methods and the optical processing of data by AR to make traffic more pleasant and safer is an essential step in this direction.